History of the Library

In May 1926, a committee was formed by the Women’s Club to look into the possibility of starting a library.  The committee consisted of Dea De Ruyter (Mrs. George),  Narine te Veltrup (Mrs. Ed), Agnes Te Paske (Mrs. A.), Esther Maris (Mrs. William), Florence Mouw (Mrs. P. B.).  In September, 1927, the Woman’s Club Library Committee, Dea De Ruyter, chairperson reported that arrangements had been made to open a library.  On October 4, 1927, the Sioux Center Public Library began in the Domestic Science room of the public high school, (also used as a lunch room).  The school at that time was located on the site where the former Community Center stood.

By January, 1928, the Library was open two afternoons a week, with Cressie De Bruyn (Mrs. William) in charge.  The book collection consisted of 83 books, some donated and some purchased with Woman’s Club funds.  Operating capital was $200.00.  This was the beginning, and the arrangement continued for nearly two years.

A lot with a small house adjacent to the American Legion property was offered for sale.  The Legion, under Commander Ed te Veltrup, raised the $900.00 necessary to purchase the property and on May 18, 1929, the building (rent free) was offered to the library and the move was made in the summer of 1929.  A partition was removed to create an L shaped library room, and another small room was used as a work and storage space.  A coal heating stove provided heat, and the lean-to-kitchen became the coal bin.  During the coldest weather, the building became warm about closing time.  This was the library location for 17 years.

When the library first began, the staff consisted mainly of volunteers.  Narine te Veltrup was responsible for the over-all management.  Many of the community’s young people donated their services as librarians and assistants.  Library patronage and the book collection grew at a slow but steady pace, and on July 26, 1935, a Library Board of Trustees was formed.  Members were Chairperson – Mrs. Ed te Veltrup, Secretary – Miss Arta De Vries, Treasurer – P. B. Mouw, Mrs. George De Ruyter, Jake De Ruyter, Mrs. William Maris, and Mrs. A. Te Paske.  Their first order of business was to ask the City Council for $300.00 a year from the tax levy.  On October 19, 1935, Clarine De Vries was appointed as the first official librarian at a salary of $.25 per hour for approximately 30 hours per month.

At the May 13, 1940 Library Board Meeting the Board voted to pay the Legion $25.00 a month in rent.  A committee was named to purchase a wedding gift for the librarian, Clarine, who became Mrs. Joe Wandscheer.  It is interesting to note that the yearly budget at this time was $435.94. 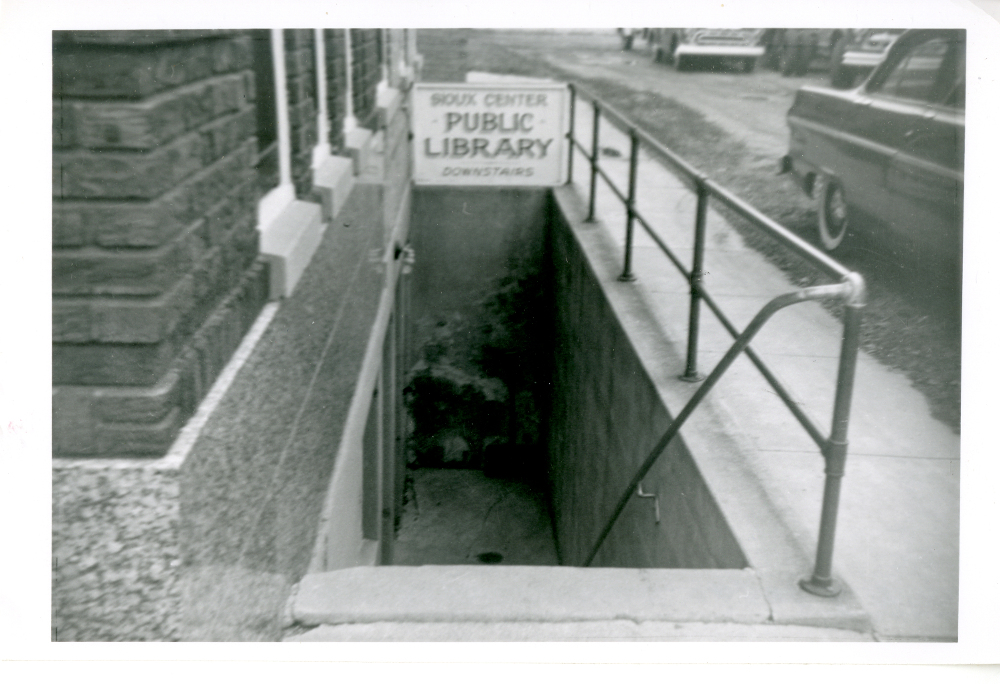 In 1946, the library facilities were no longer adequate for the increase in circulation and the growing book collection.  The American Legion wanted to tear down the old building and clear the land.  The basement of the First National Bank was secured at a rent of $30.00 per month to house the library.  The Women’s Club continued to sponsor the library and raised $600.00 toward decorating and equipping the new area for the library.  The effort won the Club first prize in a contest for “Contribution to Community Cultural Development” sponsored by the State Federation of Women’s Clubs.  The award was an original painting by an Iowa artist and was presented to the club delegate at the State Convention in Des Moines.  The delegate remembered changing trains with a suitcase in one hand the painting in the other and the wind storm using the painting as a sail to push her in the wrong direction.

When the move to the bank basement was completed in 1946, the Library Board asked the City Council for an increase in funding for the library.  Mrs. Henry De Mots was hired as the librarian at a salary of $.25 per hour, later raised to $.75 per hour.  Most of her salary was returned to the library in the form of new books or equipment.

In March of 1954, the Woman’s Club relinquished its control participation in the running of the library, and it became a municipal project.  A new Board of Trustees was appointed in accordance with municipal regulations.  The Library joined the State Traveling Library and received a part of a state rotating collection of from 70 to 100 books that were kept for three months.  In July of 1954, the Library Board asked the city for $2,500.00 per year for operating expenses and in 1955, asked for the full operating levy. 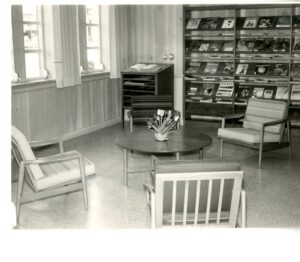 The library outgrew their space and in 1960, when the municipal building was remodeled, requested space in the city offices.  The former auditorium and stage were converted to a large library room and work area.  June 5, 1961, the library moved into the new quarters.

In 1963, a county library organization was formed and county tax money became available for serving rural patrons.  1965 saw the formation of three reading groups and a projector and expanded film and record collection were purchased.  An outreach program for seniors was added to the library services.  The first collection of large print books was purchased.

By January, 1967, the library was again in need of larger facilities and serious consideration was given to build a building.  The city manager, Arie Verrips, was on the State Library Board and was pleased to announce to the Woman’s Club that Sioux Center had been granted $80,000.00 through the State Library, to be matched by local funds, for the express purpose of construction.

On September 5 and 6, 1969, a beautiful library had been erected on property a block east of the municipal building.  The library was remodeled and expanded to 12,000 square feet in 1989, to add additional space for shelving and to add the elevator to make the basement meeting rooms handicapped accessible.  The 1969 building was destroyed by fire on July 23, 2003.  At that time, the Library Board had been discussing the need for more space and was in the process of looking for ways to add on to the current building. 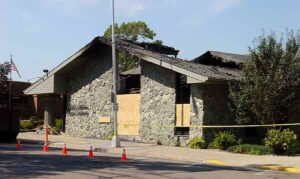 After the fire, the library moved into the gymnasium of the old Community Center, with make-shift office space among the shelves on the gym floor. We received an outstanding amount of support from our community of 6,000 and from various libraries throughout the state, in the form of donated books, monetary gifts, and time volunteered.

After our building was destroyed, all salvageable materials were taken to be cleaned.  When they returned, they were inventoried, marked with a tribute to our daring fire department, and cleaned again by volunteers. 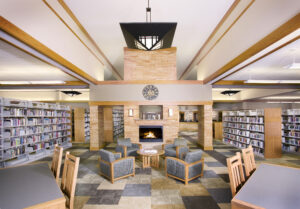 The current building provides 20,000 square feet of space for library operations and services, meeting rooms, a computer lab, art gallery, and rental space. The architectural style of the building is strongly influenced by Frank Lloyd Wright’s “Prairie School” design.  The interior decor is intentionally warm, with a significant amount of wood trim and a fireplace.  There are 233 windows in the building to provide natural light and a visual link to the surrounding environment.

It is our goal to provide a new “community center” that offers a welcoming space to individuals and groups for library services and resources, cultural activities, civic and community events, and more.

From 1927 until today, the library has grown from 83 items to over 80,000 items and a greater variety of services and other materials.  We’re proud to say that in more than 80 years of operations, our main goal of providing excellent service, access to information, books, and other materials to the community is still being met.

Install this application on your home screen for quick and easy access when you’re on the go.