One Book One Sioux County

One Book One Sioux County a collaborative program among the 8 public and 3 academic libraries in Sioux County in an attempt at community building through community conversation.

In this annual endeavor people and libraries-both public and academic-across Sioux County read and discuss the same book. The libraries host book talks in their own towns throughout the year. In the fall a collaborative event is held at a central location. In the past this has been the author visiting and a panel discussion of people involved in the story.

Save the date! One Book, One Sioux County will host authors Patricia L. Bryan and Tom Wolf on Thursday, November 3, 2022.

This year’s selection is Midnight Assassin by Patricia L. Bryan and Tom Wolf. 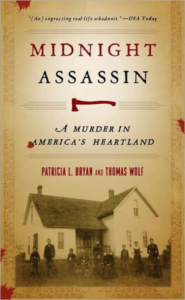 On a moonlit night in December 1900, a prosperous Iowa farmer was murdered in his bed–killed by two blows of an ax to his head. Four days later, the victim’s wife, Margaret Hossack, was arrested at her husband’s funeral and charged with the crime.

The vicious assault stunned and divided the close-knit rural community. The accused woman claimed to be innocent, but stories of domestic troubles and abuse provided prosecutors with a motive for the crime. Neighbors and family members were reluctant to talk about what they knew concerning the couple’s troubled marriage.

Midnight Assassin takes us back to the murder, the investigation, and the trials of Margaret Hossack. The book introduces us to Susan Glaspell, a young journalist who reported the story for the Des Moines Daily News and fifteen years later transformed the events into the classic one-act play, “Trifles”, and the acclaimed short story, “A Jury of Her Peers.”

Patricia L. Bryan and Thomas Wolf researched the Hossack case for almost a decade, combing through the legal records, newspaper accounts, government documents, and unpublished memoirs. The result is a vivid portrait of life in rural America at the turn-of-the century and a chilling step-by-step account of the crime and its aftermath.

Bryan is the co-author of Midnight Assassin: A Murder in America’s Heartland and the co-editor of Her America, a collection of stories by Susan Glaspell. Bryan has written and spoken extensively about Glaspell’s work. She has investigated several criminal cases from the 19th century and has published articles about them in the Stanford Law Review and the Annals of Iowa. Bryan has also researched and written about the public financing for sports stadiums.

Thomas Wolf was born, raised, and educated in the Midwest. After graduation from Knox College in Galesburg, Illinois, and a two-year stint as a VISTA volunteer on Long Island, he earned an MFA in Fiction Writing from the Iowa Writers’ Workshop. He is a two-time winner of the Doris Betts Fiction Prize and the co-author of Midnight Assassin: A Murder in America’s Heartland. His short story “Boundaries” received Special Mention in the 2014 Pushcart Prize: Best of the Small Presses.

Wolf is a frequent participant at scholarly baseball conferences and has published five essays in The Cooperstown Symposium on Baseball and American Culture. He is the author of The Called Shot: Babe Ruth, the Chicago Cubs, and the Unforgettable Major League Baseball Season of 1932, which was named “best baseball book of 2020” by Sports Collectors Digest.

Bryan and Wolf live in Chapel Hill, North Carolina. They have three grown sons and a dog named Cody.

Introductions from the Authors

One Book One Sioux County Selections by Year:

Borrow a One Book One Sioux County eBook or eAudiobook on Cloud Library:

Install this application on your home screen for quick and easy access when you’re on the go.